Plan your school visit to our national landmark

This nationally significant historic attraction has been delivering educational school programs to the school community for over 50 years. We are proud to offer you and your students some of the most outstanding educational opportunities available in the province of Ontario.

Please contact us for more information or to book a visit, please send an email to:

We’re offering four dynamic educational program options for grades 3 to 8 this winter. Invite your classroom to go back in time to the 17th century this February or March. Request a booking today!

We offer interactive activities that correspond with the development of learning outside of the classroom. All education programs at Sainte-Marie link with the new Ontario Curriculum which came into effect September 2018. In addition to relevant content, programs make use of the Concepts of Disciplinary Thinking such as Continuity and Change and Cause and Consequence. At Sainte-Marie students have the opportunity to engage in Social Studies and History in a way that gets them thinking about people, places, and ideas.

A wide variety of program options, available year-round!
Our skilled and experienced interpreters will teach and engage your students through exploration, story-telling, lively discussion, comparisons, and hands-on activities. They like kids and they love history!Their mission is to connect your class to the past, in a spirit of discovery and fun.

Students follow in the footsteps of Ontario’s first European settlers and learn how the Huron Wendat people came to influence the lives of the newcomers. Students are encouraged to compare life today with how the French Jesuits and their co-workers lived. Ontario’s first European community provides the setting for a visit your class will not soon forget.

Students experience another lifetime when they tour Sainte-Marie among the Hurons, and learn about Ontario’s earliest European settlers and the Huron Wendat people. They are introduced to the ‘three sisters’ (corn, beans and squash), and learn how the Huron Wendat taught the French to grow these crops in mounds. Their experience will include a tour of the reconstructed historic site, the making of corn husk dolls, and planting the three sisters as it was done long ago.

’The Longhouse People’ tour focuses on the interaction between the Huron Wendat people and the French missionaries. The impact of that interaction will be discussed in such areas as European technology, the introduction of disease, the effects of the fur trade, and the attempt by the Jesuits to convert the Huron Wendat to Christianity. This curriculum-based tour is an excellent opportunity for students to experience, first hand, the significance of the Huron Wendat people in the history of Canada.

“Two Cultures: One Land” will transport your students back in time to the establishment of French culture in what is now Ontario. Topics include why the French came to New France, why Sainte-Marie was constructed so far inland from Quebec, and how the newcomers interacted with the Iroquoian Wendat people, resulting in changes for both.

• Interactive tour of the reconstructed historic site
• Why the French came to New France
• Why Sainte-Marie was constructed so far inland from Quebec
• How the newcomers interacted with the Wendat people, resulting in changes for both

Students are introduced to the culture and heritage of the Huron Wendat peoples, and explore their interaction with Ontario’s earliest European settlers, the French Jesuit missionaries. Their experience includes a tour of the historic site, making First Nations Aboriginal projects out of clay, and a choice of either traditional Native games or Canada’s oldest and national sport: lacrosse.

Introduce your students to Ontario’s earliest European community and the challenges faced by the French Jesuit missionaries when they established themselves in the land of the Wendat. Students will learn of the issues relating to Sainte-Marie among the Hurons, as two very different cultures attempted to co-exist and understand one another. Your visit includes a tour of the reconstructed site and a quill pen writing session, where students will craft their own pens and write a letter to take home. This in-depth, hands-on activity provides insights on French culture in the 17th century and demonstrates the importance of the written word in our understanding of the past.

Spend a rewarding day with your class in the vibrant past of Ontario at the mission headquarters of Sainte-Marie. This experience includes an extensive tour of the site, and hands-on workshops that encourage interaction and understanding. Work with clay, play some of Canada’s oldest games including lacrosse, and explore the related past in the museum. Your students will enjoy a day like no other.

Immerse your students in a day long past at Sainte-Marie among the Hurons. Follow in the footsteps of Ontario’s first peoples and the French newcomers as you explore the mission headquarters on tour. Participate in hands-on workshops, including 17th century fire-starting techniques, quill pen writing, enjoy Canada’s oldest national sport, lacrosse, and make connections between past and present in the Museum.

Walk Where They Walked is a full-day pilgrimage experience developed for both elementary and high school students in the Roman Catholic separate school boards of Ontario.

At Sainte-Marie, a specialized tour of the historic site will highlight important historical elements related to the life of St. Jean de Brébeuf, the story of ‘First Contact’ between the French missionaries and the Wendat people, and daily life at Sainte-Marie.
At Martyrs’ Shrine, students will have the opportunity to follow in the footsteps of the Canadian Martyrs. Their experience begins with the film: “Martyrs’ Shrine: A Home of Peace”. This will be followed by a presentation given by a Jesuit Priest integrating aspects of the lives of the Canadian Martyrs into the reality of Christian life today.
We invite you to take part in a spiritual journey… and to walk where they walked.

During this full-day program in conjunction with Wye Marsh Wildlife Centre, participants will learn how people were influenced by the environment and how they adapted to it in order to survive. Participants will experience first-hand what it took for both the Wendat and the French to survive in the Wye Valley over four centuries ago.
At Sainte-Marie, students will compare European and Wendat diets, explore the challenges of bringing livestock and European technologies into the region, and how the waterway system might have been used. Students will learn of the importance of games such as Lacrosse, in the Wendat Culture, as a way of keeping warriors fit for battle, and of solving disputes between villages.
At the Wye Marsh participants will learn how knowledge of the natural environment can contribute to the survival of all species, including humankind.
Participants will deepen their understanding of how people were influenced by their surroundings and how they, in turn, adapted their environment to survive, using natural resources, including animals and birds. 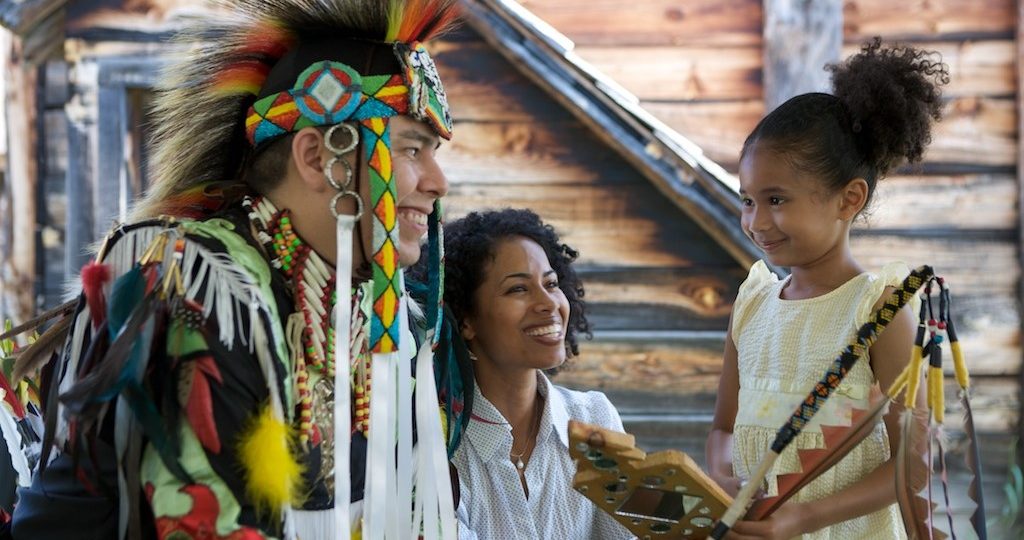 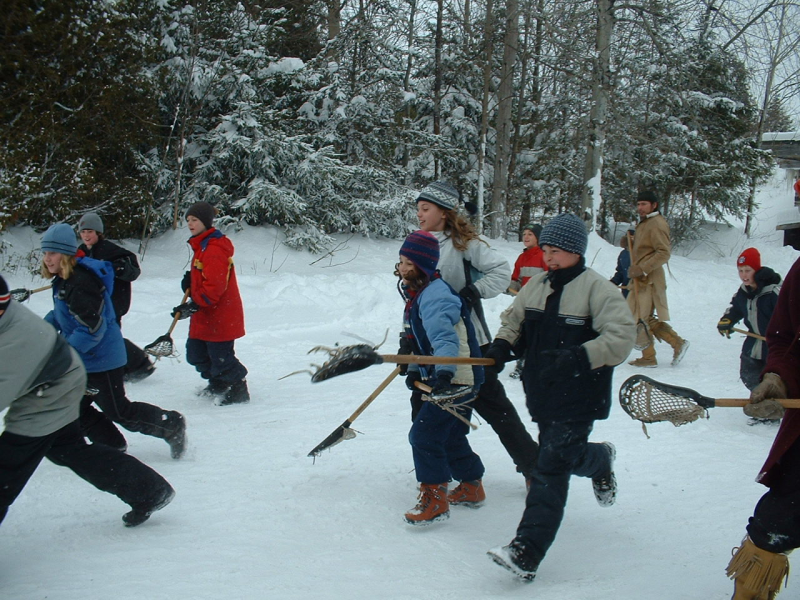 Students will have the opportunity to experience the historic site in-person for 24 hours. Invite your class to step into the past and live a historic lifestyle through a mix of indoor and outdoor activities, including the exclusive use of our facilities and reconstructed mission. Your group will have dedicated historical interpreters to guide them during their entire stay.

Choose from our many activities to customize your program:

Cost: $50 per student (including overnight accommodation) 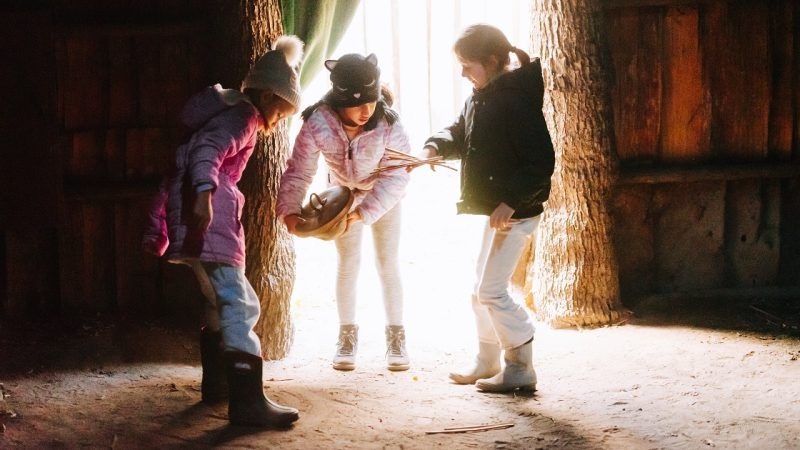 This program will provide teachers with the necessary information to interpret the historical site and each specific building for a self-guided exploration. The learning kit included in the backpack will allow teachers to navigate stops on the historic site as well as bring back learning tools to their own classrooms for further learning.

What is included in your backpack?

Cost: $8 per student (maximum of 30 students per backpack) 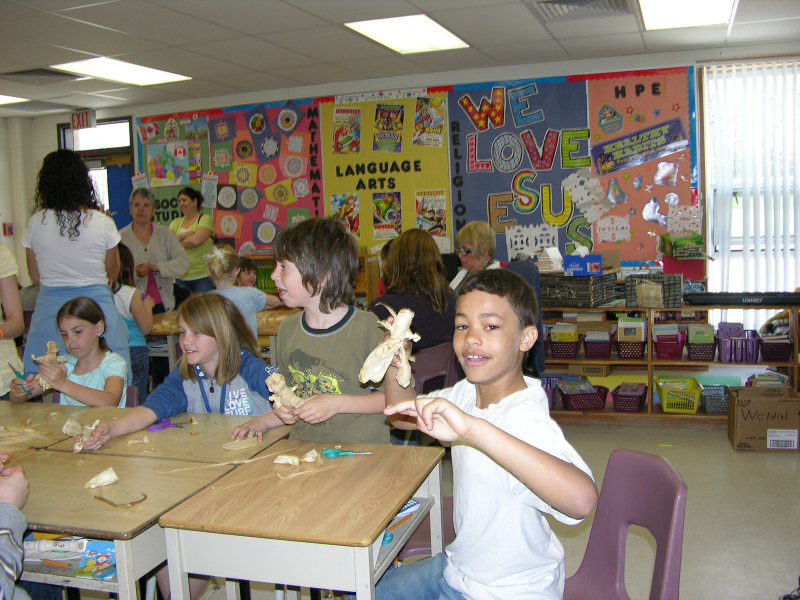 Let us bring history to you! Sainte-Marie’s costumed historical interpreters will explore the story of Ontario’s first European Community with your students. Through hands-on activities, videos and lively discussion, students will learn about the lifestyles and relationship of two very different cultures: French Jesuit missionaries and the Wendat people.

Costs vary by season and distance:

We can bring history right into your classroom. During Sainte-Marie among the Hurons’ virtual tour, students follow in the footsteps of early European settlers and discover how the Huron-Wendat people came to influence the lives of the newcomers. Joined by a live online historical expert, students will then engage in a one-hour Q & A session. Educators are also provided follow up material to extend discussion and learning.